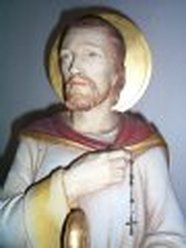 Many people ask who Saint Silas was. He was one of the  companions of Saint Paul and is mentioned in the Acts of the Apostles. He is sometimes refered to as Silvanus (from the Greek word meaning wood).  He is mentioned as an elder of the Church in Acts15:22 he may have been a Jew and was afforded the rights of a Roman citizen (Acts 16:37). Some of the early Fathers consider Silas to have been bishop of Corinth, and Silvanus bishop of Thessalonica.

The church contains a fine image of Saint Silas which  was given by  the people of Saint Silas, Kingston upon Hull in Yorkshire, He is shown carrying a bishop's crook. 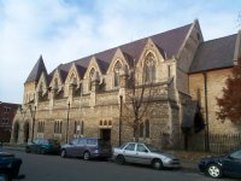 The founder of the our church in Pentonville was Father A. L. Courteney, Vicar of Saint James, Pentonville. Saint Silas was carved out of his parish.  Father Courtenay bought  land (previously the site of a brewery) on  the junction of Risinghill Street and Penton Street and a temporary iron church was erected, presumably  made out of  corrugated iron. S.S.Teulon designed the stone church which replaced the  chapel  and the foundation stone was laid on 19th July 1860.  Father Courteney however had difficulties in  the construction of the new church and  one particular wall  (at  the east end) had to  be demolished, being to  near to  the road, it was rebuild further back.  He later sued both the architect and the builder for using Kentish Rag stone, a soft stone which  crumbles easily after exposure to  the elements.

The church was eventually completed by E.P. Loftus Brock. It was altered considerably from the original  design, as can be seen by looking at  the cloisters, where corbels supporting non-existent galleries or beams can be seen protruding  from the walls, supporting nothing. The final plan was very much simpler than Father Courtney's original plan.

The church was opened in April 1863 and was dedicated as Christ Church. This dedication was altered to Saint Silas at the consecration on 16th July 1867. Saint Silas is an uncommon dedication, there being only one other church in the diocese of London with the same dedication  - Saint Silas the Martyr, Kentish Town - a not too distant neighbour.

The walls of the church are faced with Kentish Rag stone with a mixture of brick.  The nave is wide and tends to take the visitor by surprise, particularly as the  exterior gives the impression of a much  smaller  building.  Along ether side of the building there are passage aisles.  The attractive clerestory windows are all under gabled roofs, each one different in design and pattern.

The roof has always attracted architects by its peculiarity of having two long wall posts per pier, which support twin tie-beams at a low level.

The Martin Travers baroque altar to Our Lady of Walsingham is the gift of the American gin distiller, Mr F. Russell Brown, whose family originated in these parts. 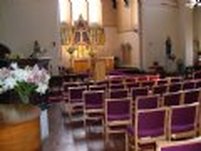 ﻿​There is a west gallery containing a fine organ which came to the church from the redundant church of Saint Thomas, Regent Street (also known as Archbishop Tenison's Chapel, Kingly Street).  See the Musical Notes section of this website for more details. In 1884 a chancel was added by William White

The interior of the church is a cream white. The High Altar is of stone marble top with a slate base. The High Altar contains the authenticated relics of S. Vincent (martyr) and S. Victorinus (martyr).

When the church was first build it was not associated with the catholic revival; however in White Lion Street a mission had been set up by the parish of All Saints Margaret Street, a church which at that timehad played  a part in the 'Oxford Movement' in the West End of London.

The Mission Church under the patronage of All Saints came to stand for a very much more robust and  full blooded Catholicism.  Saint Silas church and the mission church became linked together under one administration.

Where Father Preedy had taught the fundamentals of the catholic faith, along with boxing and football, Father Archer added the Papalist extras such as  devotion to  the  Sacred Heart of Jesus and to Our Lady, so  that  Saint Silas and All Saints Mission  became as  famous, or rather infamous, as the church  of  Saint Saviour,  Hoxton,  for what was described  as extreme Catholicism.

In Father Archer's incumbency Low Mass was frequently said in Latin. Benediction and Exposition of the Blessed Sacrament  brought the church into  line  with  the devotional practices of the rest of Western Catholic Christendom. The Children of Mary would meet week by week to say the Rosary together. Marian processions in May were the order of the day and were well supported by girls wearing white veils.

​Immediately after High Mass on Sundays in those days, a Latin Mass was said for lapsed Catholics. Indulgencies were to  be earned by reciting certain prayers and even by going through  certain doors.  There was nothing to distinguish Saint Silas, Pentonville, from those churches which were under the jurisdiction of the Cardinal Archbishop of Westminster. The people responded to it and loved it!

​The church interior still reflects the Catholic way of practising the  Christian faith. The shrines are still here, as are the candles which  burn before them. The Pieta or Our Lady of Pity is a memorial to those who  died in the wars.

The chapel of All Saints at the back of the Church is the old high altar and triptych taken from the mission when it closed. It is slightly Art Nouveau in style.