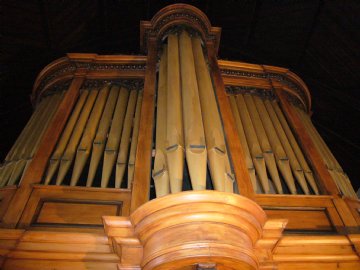 The present organ at St Silas' was originally in St Thomas', Regent Street, London. St Thomas' was to be found in Kingly Street, between Regent Street and Carnaby Street. After St Anne's, Soho was destroyed in the blitz of 1940 its congregation moved to St Thomas', and in 1945 the parish became that of St Anne with St Thomas and St Peter. The author Dorothy L Sayers was famously churchwarden there. It was at St Thomas' that Dr John Birch, subsequently organist of All Saints' Margaret Street, the Temple Church and Chichester Cathedral, held his first organist's post. St Thomas' was made redundant in 1954 and demolished in 1972/73.

In his March 2020 report on the current St Silas' organ, Bruce Buchanan provided a history of the instrument drawing on: A G Jackson's History of St Thomas' Church, Regent Street; the 1963 Survey of London; Nicholas Thistlethwaite's Organ Building in Georgian and Victorian England: The Work of Gray & Davison 1772-1890; The Illustrated London News for 17 May 1856; the records of Henry Willis & Sons Ltd; J Boeringer's Organa Britaninica; the National Pipe Organ Register; and conversations with Maurice Merrell, Director of Bishop & Son Organ Builders, who maintain the instrument. Buchanan's history of the instrument is summarised in the next two paragraphs.

The foundation stone of St Thomas', then known as Tenison's Chapel, was laid in 1702 and an organ was ordered from Price. In either 1750 or 1767 (sources differ) a new organ was acquired from John Byfield, who used part of the casework from the old organ. It had one manual and eight stops. In 1847 Bevington added a short compass Swell Organ and one stop to the Great. In 1856 a new organ was provided by Gray & Davison, reportedly using six ranks from the previous organ and adapting the casework. In total it had either eighteen or twenty-one stops (sources differ) on Great, Swell and Pedal. In 1870 the organ was rebuilt by Gray & Davison, and in 1907 it was rebuilt again by Alfred Kirkland. It is likely that the soundboards and building frame were turned through 90 degrees in this rebuild to enable the console to be fitted on the south side of the casework. A photo of 1911 shows the casework looking recognisably the same as that now at St Silas'. Between 1919 and 1923 the organ was fitted with pneumatic action, reportedly by Noterman. In 1947 Henry Willis III inspected the organ prior to submitting an estimate for work. He said "from the tonal angle the voicing of the pipework is mediocre though not ineffective, this being largely due to the excellent position of the organ. Willis cleaned and overhauled the instrument in 1948 but his recommendations for tonal alterations were not undertaken. No other work seems to have been done before the organ was moved to St Silas' in 1966.

The organ casework is as it was in Regent Street except that the lower front panelling has been completed to fill the space originally concealed by the gallery front at St Thomas', and the original console space on the south side has been filled by fixed wooden louvres. The front pipes have been painted over to conceal the decoration of the original pipes and the bare zinc of 1907. One pipe inside the case has been left with its original decoration, presumably as a historical record.

The organ was purchased from St Thomas' by St Silas' in 1966. N P Mander Limited removed it, installing it at the west end of the west gallery next to the rose window, with a new detached console at the south east of the gallery and with electric action from there to the organ case, but inside the case the action appears to have been left unchanged and not refurbished. The layout of the soundboards and their pipes remains south-facing, even though the console is no longer at the south of the case. The Great Large Open Diapason was transferred to the Pedal as a Principal 8', presumably to give the Pedal better definition, and a two-rank Mixture was 'prepared for' on the Great to make up for its loss, but it has never been provided. It was also intended to extend the Pedal Principal down to 16' as an Open Metal, so the existing Open Diapason 16' rank was not brought to St Silas', but the extension has not been made: the Open Metal 16' ends at tenor C. The extra panelling needed was provided by Thomas Cole of Barnsbury. The opening recital was given by Nicholas Jackson on 24 January 1967.

In 1980-81 the Community Hall was created under the original gallery and the gallery was extended eastwards. The organ console was moved to the south-east corner of the gallery extension, presumably to regain an uninterrupted view of the sanctuary. In fact a faculty had been granted in 1980 to move the console to the south east of the church, but this was not done, perhaps because it was found  there would be a good enough view of the sanctuary from the south-east of the gallery, and to avoid the problems of time-lag for the player. At some point between 2005 and 2010 the speaking pipes in the facade (the bass of the Great Open Diapason), which had not been connected on installation at St Silas', were finally brought back into use by Bishop's. In 2014 the Swell stop action deteriorated to such an extent that Bishop's installed a new drawstop action. The present specification is as follows.

What was a good organ in 1856 had become mediocre by 1947 and is now in a poor mechanical state. Installed in 1967 in basically the same condition it was in at St Thomas', it has served St Silas' for 50 years with little more than regular tuning and minor repairs.

All the reeds are out of regulation and have various defects of speech. Several wooden pipes are reliant on temporary repairs to prevent collapse. Some notes are not sounding on different Pedal stops and most notes of the top octave of the Great organ are not working.

The soundboards appear to have been last remade about a century ago. The stop action can be unreliable due to warping of the wood. This can prevent a stop from coming on at all, or can cause tuning issues if the slider does not fully move. The Great Flute 4' has been fixed off to prevent it getting stuck half-on.

The blower is not strong enough for the organ, and the problem is compounded by leaks in the wind supply, especially in dry weather. Full organ with Swell octave coupler runs out of wind and goes flat in big chords. Pneumatic leakage means the Swell pedal does not move the Swell shutters.

As well as using an inadequate blower, there are further issues with the way the organ was installed, no doubt due to financial constraints. The south orientation of the organ inside its case means the sound is projecting towards the south wall, not east into the body of the church. It also means the wooden back of the Swell box is not sheltering the pipes from heat from the western rose window. This causes them to go out of tune quickly, though the problem has been partially ameliorated by hanging domestic curtains to cut out direct sunlight. The organ was not changed to modern orchestral pitch at 60 degrees Fahrenheit, and the position of the organ in the highest part of the building where the heat collects means that the pitch can rise to more than half a semitone sharp, making it impossible to play with orchestras and most instrumental soloists.

The effect of the organ is very muted, not only because of the orientation of the soundboards, but also because of the dullness of voicing as noted by Henry Willis in 1947. There was no revoicing when the instrument was moved to St Silas'. Both manuals must be coupled to support even a small congregation singing hymns.

The touch of the manuals of the 1967 detached console is extremely light, and the gap between black notes is irregular, varying between 1.5 cm and 1.8 cm on the Swell. Music has to be carefully and often unusually fingered to avoid smudging adjacent notes.

What preceded the organ brought from St Thomas', Regent Street? There are only two clues. There is a photograph of the church, date uncertain, which shows a previous organ in the gallery. See Michael Yelton, St Silas, Pentonville, The First 150 Years, 2017, page 70.  And the National Pipe Organ Register record N16826 describes an organ by Henry Fincham positioned in the west gallery with the following specification:

This was from an organ survey in 1939. The National Pipe Organ Register reports that it was moved to St Mary's, Goring-by-Sea in 1950. (Due to a transcription error the 1939 survey was at first given as St Saviour's Penton Street, the previous entry being for St Saviour's Hoxton and the "St Saviour's" being carried over by mistake. In 2015 it was corrected to St Silas' Penton Street after the mistake was spotted by someone who had learnt on that instrument at St Mary's in about 1960.) The mystery is what happened at St Silas' between 1950 and 1966, when the organ from St Thomas' was installed. Members of the St Silas' congregation remember the St Thomas' organ replacing an instrument which was rather too loud for the building. The St Thomas' organ is not quite loud enough for the building. It would be surprising if the twelve-stop Fincham organ was louder than the present 24-stop organ, so perhaps another, louder instrument was installed and only lasted sixteen years. 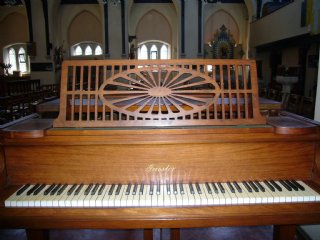 The piano at Saint Silas is a baby grand Geissler. Its attractive sunburst music stand suggests it is probably from the 1920s or 1930s. It was given to Saint Silas by All Saints, Margaret Street and was restored in late 2005 in memory of Nancy Brock.

The Yamaha P250 Digital Piano, with its wide variety of voices, is used for processions which end at the All Saints' altar in the Community Hall, for Christmas communion improvisations, and on other special occasions. It was given in April 2006 by a kind and generous supporter of the music at Saint Silas.